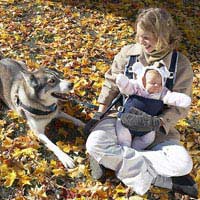 One of the key ways to ensure that you have a happy, stable and confident dog that can cope with the challenges of living in our modern society is to make sure that you have socialised them properly during the critical imprinting period between 4 and 14-weeks. This is possibly the most important developmental period in your dog’s life – it is essentially the time when your dog will be forming his personality and creating the “blue print” of behaviour that he will follow for the rest of his life whenever he meets new experiences.

Dogs that were not socialised enough or poorly socialised (introduced to experiences in the wrong manner) can develop severe behavioural problems in adult life, ranging from constant fear and anxiety to sudden panic and serious aggression, as it struggles to deal with a host of experiences and stimuli that it finds unnecessarily threatening. These same dogs could easily have been stable, confident companions if just a little extra time and effort had been spent on their socialisation during their puppyhood.

And the sad thing is that once a dog’s personality has been imprinted and the socialisation period has passed, it is practically irreversible. No matter how much socialisation you do in later life, it will never make up for the lack of early experiences nor change the dog’s fundamental personality, although gradual counter-conditioning and de-sensitisation can help the dog learn to cope better.

Why So Many Experiences?

Unlike humans, dogs are very poor at generalising. While we see a man wearing a hat, wearing glasses or carrying an umbrella as essentially the same thing with minor modifications, a dog would view them as three totally different foreign creatures, each potentially threatening until it has been shown otherwise. Therefore, a dog has to form positive associations with a wide range of things before it can learn to generalise and to encounter new creatures, objects, sounds and experiences with equanimity.

Here is a handy list of exercises to do with your puppy before it reaches 14 weeks:

During your puppy’s first weeks with you, make an effort to take him out to as many places as possible – even “boring” places like the supermarket carpark. They may be boring to you but they are full of new experiences for your puppy. If he has not completed his vaccinations yet, carry him to as many places a possible and once he has completed his shots, make sure you take him for a wander in the following places:

This list can be endless and is limited only by your own resources and imagination.

Remember, the important thing is for your puppy to have positive experiences with these things. It is no use introducing him to hundreds of things if he is overwhelmed by each or rewarded for inappropriate behaviour towards them. NEVER reassure a fearful or timid puppy – this will only reward and encourage anxiety and possibly even fear aggression. Only pay your puppy attention when she is reacting calmly and confidently to a new situation – make sure you give her plenty of treats and praise at those times to build up positive associations.