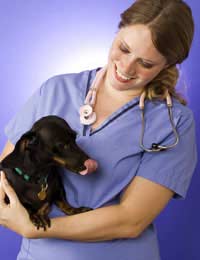 Every puppy owner has to decide whether they want to breed from their dog or bitch or are they just a much-loved family pet?

Mating a bitch and having puppies in the home can take a big chunk out of your life. You have to find good homes for the puppies and they become your responsibility for the length of their lifetime. Some puppies are not wanted and you will be responsible for finding them new homes or even taking them back yourself. Yes you may have earned some money from the sale of the puppies but is it worth fifteen years of responsibility?

Spaying is the removal of the ovaries and uterus; this involves opening up the abdomen and is a major operation. This will stop all seasons and is irreversible. An added bonus of spaying is that the bitch is less likely to have mammary tumours (breast cancer) in later life. Pyometra, a rather nasty and life threatening disease of the womb is also avoided.

When to do it

There have been many vets who advocate spaying a bitch before her first season; this can mean a young puppy of four months undergoing a major operation. Some breeds (Old English Sheepdogs, Dobermans) experience urinary incontinence after this operation, this can be avoided by spaying the bitch six weeks after her first season but definitely before her second season – but not straight after a season as there is an increase in blood flow during the operation. Vets are now coming around to the idea of spaying after the first season. If in doubt as to how long your bitch goes between seasons or when she will have her first season speak to the breeder as quite often the bitch will have a similar cycle to her mother and grandmother.

When a dog is neutered he has his testicles surgically removed which is a far simpler operation than the spaying of a bitch. This should ideally be done before the age of twelve months when they become sexually active. The removal of the testicles drastically lowers the chances of prostrate cancer in later life and eliminates the threat of testicular cancer. A dog will also stop marking his territory and becoming aggressive against other dogs when he is around bitches that are in season.

It is likely that the dog will become fatter after being neutered but simply give him less food!

Dogs bounce back very quickly after an illness or an operation. A couple of days of less activity are required plus the owner must make sure the dog does not lick its wound and open up the incisions. An Elizabethan collar, rather like a lampshade, can be fitted to the dogs collar and will ensure he (or she) cannot reach the operation area. These collars are obtained form your veterinary practice. Stitches are removed after 7 – 10 days.

Owners should seriously consider whether to spay or neuter their new puppy. Speak to the breeder and fellow owners of the breed to find the optimum time for the operation.