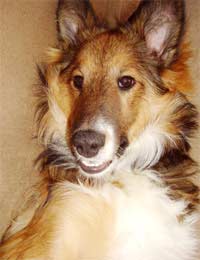 Tricia had rescued Sheba the Shetland Sheepdog from a dog pound and felt very sorry for the nervous little dog. After bringing Sheba home on the weekend, she made her as comfortable as possible with her own bed, toys, chew treats and lots and lots of fuss and attention.

Come Monday morning, Tricia set off to work believing that the little dog would be fine with all the treats and toys around her. But when she arrived home that evening, she was dismayed to find the house in a horrific state.

“It was as if a tornado had hit the place,” Tricia said disbelievingly. “Sheba had pulled everything out and chewed things – the furniture, the walls, even the corner of the front door! I couldn’t believe that such a little dog could do so much damage!”

Hoping that it was just a one-off incident and that the little dog would grow used to being on her own, Tricia cleaned up the mess and tried to put it out of her mind. But things did not get better. Each evening, Tricia came home to find the house in a state and more and more things chewed and destroyed.

By the end of the week, she couldn’t take it anymore and rang up her friend, Abbie, in despair. Abbie had owned dogs all her life and was very experienced in all aspects of canine behaviour. She had a particular interest in training and canine behaviour and always kept up to date with the latest research and training methods. When Abbie heard about Sheba’s behaviour, she sighed.

“Sounds like a case of separation anxiety to me,” said Abbie. “It can be quite hard to treat and you may need to get the help of a canine behaviourist. But there are some things you can try first, if you like, which might help. Since you’ve only just got Sheba and she is still new to you, she might be more open to change because she hasn’t had time to form long, bad habits with you yet.”

Abbie suggested several areas where Tricia could change her behaviour to help reduce Sheba’s separation anxiety and Tricia eagerly set about following her suggestions: Tricia was delighted to discover that just by implementing these suggestions, she quickly saw a change in Sheba.

“She seems like a much calmer, happier dog now. Before, she always seemed so anxious and nervous about everything and was always acting up, especially when I returned home. But now – she seems so much more confident and settled,” said Tricia. “It was hard work in the beginning,” she admitted. “You needed so much patience and I almost gave up so many times – it seemed such slow progress, having to repeat going out and coming in so many times and having to count the minutes I was leaving her…but it’s worked and that makes it all worthwhile.

Sheba loves her crate now and is completely fine when I leave the house in the mornings. In fact, I think she almost looks forward to her solitary periods as these are the only times she gets those special toys with the yummy special treats!” laughed Tricia.