Stopped Puppy from Jumping Up: A Case Study 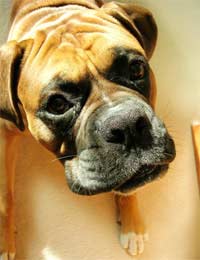 Lena and Andrew loved Boris, their 16-week old Boxer puppy – with his wrinkled face and madly wagging stubby tail, he was so cute that they could almost forgive him for anything. Almost. They didn’t mind his puppy chewing or digging in the garden – they were getting on top of that – but the one thing they could not cope with was Boris’s “bouncing”.

Almost as if he were on springs, Boris would start jumping up the minute he saw anyone – in their laps, in their chests, in their faces, on their backs.

“I’m really worried,” said Lena. “In a few months, Boris is going be a large, powerful dog – we’re struggling already; I don’t know how we’re going to stop him when he gets bigger.”

His behaviour had even started to affect Lena and Andrew’s social life.

“Our family and friends just don’t want to come and visit any more,” admitted Andrew. “They’re scared of Boris or they find him really annoying. It’s hard because he just wants to be friendly but his behaviour puts people off.”

Not only was it extremely annoying but it was also potentially dangerous, especially as Boris was getting bigger, heavier and stronger each day. Lena had already suffered 2 black eyes when she bent down just as Boris jumped up and the final straw came when Boris knocked over Lena’s elderly aunt, nearly resulting in a hospital visit for the frail old lady.

Lena and Andrew decided it was time to enlist the help of a professional dog trainer. By consulting their vet and other dog-owning friends, they compiled a list of qualified, accredited dog trainers in the area and then chose an individual whose methods they felt comfortable with.

Trainer, Melissa, arrived at their home for the initial consultation and was instantly given the ‘bouncing Boris treatment’. To their surprise, instead of shouting at Boris or pushing him away, as they and other guests had done in the past, Melissa simply stood completely still, arms crossed in front of chest, staring straight ahead and ignoring Boris. After a moment of persistent jumping, the puzzled Boxer puppy stopped and looked at this strange new visitor. Why was she not reacting the way everyone else had? Well, this was a bit boring, Boris decided, and abandoned the jumping game to take himself off to his chew toy in the living room.

“I can’t believe it!” Andrew exclaimed. “That’s the first time we’ve seen Boris voluntarily stop jumping on someone and leave them alone. In the past, we’ve always had to physically haul him away from the person, keep him pulling like mad on a leash or shut him up in another room.

“Yeah, and we’d usually get really hot, flustered, angry, upset and sometimes even injured in the process!” added Lena.

The couple were flabbergasted. It seemed miraculous that Melissa was able to stop Boris jumping up so easily.

They had already learnt a valuable lesson: Boris jumped up on people because he was rewarded with attention, even if it was the negative kind of shouting and pushing. When he received no attention or reaction, the game ceased to be interesting and he stopped jumping up of his own accord. He decided to do something else which was more rewarding – such as chewing his toys.

Over the course of the next hour, Melissa explained the principles of reward-based training to Lena and Andrew:

“Basically, dogs repeat behaviours that are rewarded,” said Melissa. “Therefore, the key to getting your dog to behave well is to reward those behaviours you want and ignore the ones that you don’t. How do you reward your dog? You can use tasty food treats, an exciting game with the dog’s favourite toy or even just attention, such as pats, praise and cuddles – in fact, dogs crave attention more than anything and find it so rewarding that they will often do things, even if it only gets them negative attention, such as shouting.”

Thus in Boris’s case, not only did Lena and Andrew need to stop him jumping up but they also needed to teach him an alternative behaviour to perform instead when greeting people. One of the easiest is a simple Sit, which most dogs can perform with ease. So for the next few weeks, Lena and Andrew began a new training regime:

“I can’t believe how quickly he’s catching on to things,” said Lena a few weeks into the new training regime. “He’s hardly jumping up anymore – except the few times when he gets really excited about something. But then if we just ignore him for a bit, he quickly remembers his manners and will sit beautifully for attention. It’s like having a different dog!” laughs Lena.

With Boris’s new good manners, guests now enjoyed visiting the house – and Lena and Andrew were delighted to be able to show-off their cute puppy, instead of constantly cringing and apologising for his terrible behaviour.