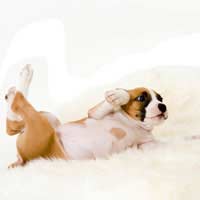 Everyone who owns a dog wants it to be well behaved. But dogs don't come to us knowing what 'well behaved' means in the human world. Therefore, it is up to us to teach them.

But how do we train a dog to do what we want it to do? There are numerous methods out there, but the two focused on in this article are reward (food) and clicker training.

When you reward, it must be directly associated with a desired behaviour. However, people unknowingly often reward their dogs when it is doing something unwanted.

For example: a dog growls when it sees another dog. You pick the dog up and/or pet it and say 'that's ok.' You have just rewarded your dog for a negative behaviour. You don't want your dog growling at other dogs for no apparent reason.

What is a reward? Traditionally, and most commonly, it is food. But rewards can also be affection, toys and/or praise.

So how do you get your dog to do what you want it to do, so you can reward him? The most common method is hand signals. For example: you want to teach your puppy to sit. Place the treat (make it very small as you will be dishing out a lot of them in the early phases of training) in front of the puppy's nose. This will get him to pay attention. Then give the command. Nothing will happen (initially) that is ok. When the puppy starts to lick/nibble at the treat, lift it over the puppy's head and hold it there. As the puppy lifts its head to nibble the food, its bum will hit the ground and be sitting. Give the treat, along with lot of praise.

As the dog becomes more skilled in the command, start treating intermittently. The dog will try harder to get that food reward. Eventually the puppy will accept that food won't be coming and do the command because it was told to. However, always give praise and affection.

The clicker, a small metal box that makes a clicking sound when pressed, means absolutely nothing to the dog, until you start to associate the 'click' with treats.

In order to get your dog to make this association, handlers load the clicker - repeatedly click then immediately offer a treat. This gets the dog to associate the click with a treat. Once this association is made, training can begin.

Luring can be done to speed the process along. Just as with reward training, the treat is held above the dog's nose. As soon as the dog's bum hits the ground, the clicker is triggered, and then the treat is given.

The method you choose to use to train your puppy is completely up to you, as both are desirable methods of positive reinforcement.

Each method also requires the handler to be consistent with its rewards and the timing of them.

Repetition is also key. The only way dogs, and people for that matter, learn, is by repeating an exercise over and over again until it can be performed perfectly. For dogs, that means the behaviour can be performed without lures and praise, although we all like to be praised for a job well done, and the same goes for dogs.