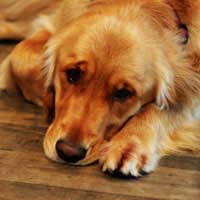 When you leave for work does your dog start barking, howling and whining? And when you come home, are you overwhelmed by the exuberant greeting and constant following you around the house your dog greets you with?

If so, your dog may be suffering from separation anxiety. Other symptoms include: depression, excessive licking, panting and circling.

“Separation anxiety is a neurological distress response to separation from the person to whom the dog is attached, a high degree of uncertainty of an outcome, or the probability of punishment,” according to Claws and Paws Veterinary Hospital. “In dogs with this condition, the level of anxiety is disproportionate to the inciting circumstances.”

SA can range from moderate – the dog doesn’t so much destroy things as spends the day collecting his owner’s personal belongings, curls up with them, or arrange the items in a pattern to help him reduce mental tension – to severe. Dogs suffering from severe SA have been known to break their nails and/or teeth while trying to get out of the crate, as well as destroy doors or even jump out of windows as their anxiety increases.

Dogs of any age or breed can suffer from SA. However, it is most commonly found in shelter dogs that have been bounced from home to home only to land in a shelter.

Other dogs may suffer from SA simply because they haven’t yet gained enough self-confidence to be left alone; the puppy may have been left alone for too long; or the dog may have been born with the genetic disposition to become anxious or afraid when stressed.

SA is also commonly found in older dogs who are losing their hearing and vision. “They become more dependant on their owners and may be more anxious when they are separated or even out of view,” according to Claws and Paws.

SA can also occur when there has been a dramatic life change such as marriage, a new baby, new home and/or schedule change.

Owners, however, are not blameless. “When a dog becomes overly dependant on its owner, such as never being alone, sleeping on the bed, never becoming acclimated to the crate, problem behaviours may result,” reports Chicago’s Doggie Do Right.

People with the following personality traits, according to Doggie Do Right, can create SA in virtually any dog: over emotional interactions with the dog; babies the dog; won’t obedience and crate train the dog; overly permissive/won’t establish boundaries; over-protective and won’t let the dog be a dog; uses the dog to replace human interaction; goes into hysterics when the dog plays with another dog; or won’t leave the dog alone for any length of time for any reason.

Once your vet has determined the cause for his behaviour is SA and not another reason, the best treatment consists of both medication and behavioural modification – for you and the dog.

When using medication, it must be given exactly as prescribed, not just when the dog appears to be anxious. The medication won’t work immediately; it can take weeks, sometimes months, for its effectiveness to be recognised. And the first drug your veterinarian puts your dog on may not be the best one. A change in dosage or medication may be required.

Behaviour modifications may include increasing your dog’s physical activity, like going for a walk or playing fetch in the back garden, before leaving for the day. A tired dog won’t care that you aren’t home because he’s too busy sleeping. In addition to walking, increase the dog’s mental stimulation with fetching games, obedience commands or participate in organised dog sports.

You also have to change your habits - your dog associates your preparing to leave to destructive behaviour.

As well, leave your dog toys and treats that will keep him amused and leave a radio or TV on to make the house feel less empty.

When you first bring home your new puppy, establish that you are the pack leader. “It has a calming effect on him,” reports the American Foundation for Animal Rescue. “He feels safe and taken care of… Obedience training is the best organised method of establishing yourself as a stronger leader.”

It is also important to slowly get your dog used to being alone, preferably in a crate. As well, encourage the dog to do his own thing – eat a bone etc. in another room when you are at home. You will still develop a strong bond, but not an over-dependant dog.