Getting Your Dog Neutered 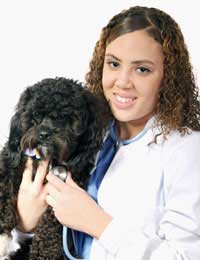 We’ve all heard that spaying or neutering dogs helps control the pet population. But are there any other benefits to spaying/neutering? Are there any negative repercussions to having a dog spayed/neutered?

The only negative repercussion is that the procedure whether it is performed on females (spaying – removal of the reproductive organs) or neutering (removal of the testicles) is that it is irreversible. Therefore, you cannot change your mind and decide to breed your dog once the operation has occurred. Other than that, there is nothing but positive benefits to spaying/neutering.

When it comes to male dogs, the greatest benefit to neutering is that is cuts down on roaming. Intact male dogs can sniff out a female in heat from virtually miles away. The male dog can be so driven by this scent that he will do anything he can – dig under the fence, run across busy streets and dodge cars (if lucky), as well as get into scraps with other dogs or cats, in order to get to her. “Once dogs establish a habit of roaming for whatever reason motivates them, it is hard to break that habit,” reports Mike Richards, DVM.

Other negative behaviours curtailed by neutering include leg humping, jumping as well as urine marking, aggression towards other male dogs and/or territorial aggression, all of which are related to the high levels of testosterone present in the adolescent male dog.

Neutering has also proven to shrink the prostate “thus preventing both prostatitis as well as the uncomfortable benign hyperplasia (enlargement) that occurs with aging,” according to the Mar Vista Animal Medical Center. Certain types of hernias, testicle and anus tumours are also prevented by neutering.

On average, vets recommend neutering dogs between six and 12 months of age. There are reports of dogs being neutered as young as eight weeks of age, but there is no evidence to prove undergoing this procedure at such a young age is more beneficial to the dog than waiting until he is older.

However, neutering is not something that should be put off past 12 months of age. “Your one-year-old or two-year-old intact male dog may be acting like a neutered male in terms of being easy to live with,” according to trainer and author Kathy Diamond Davis. “But chances are that if you leave even an easy-going fellow intact to the age of three years, you’ll see undesirable behaviours.

“The age of three is primetime for an intact male dog to be involved with a terrible tragedy, such as those dogs who have killed children.”

It is obvious that not all dogs are going to kill children; however, owners of intact males need to be aware of the heightened risk of aggression that intact males possess.

Like males, intact females, or bitches, can become aggressive and exhibit erratic behaviours due to hormonal fluctuations. Females typically have two cycles per year – one every six to nine months. Along with the hormonal fluctuations, bitches can create quite a mess via the discharging of blood. There are dog nappies to help owners keep their house clean. However, it is not necessary for a female to suffer any of this.

If you are not going to breed your dog, then veterinarians recommend that females be spayed prior to their first heat cycle. “[The spaying procedure] can be difficult and time consuming on bitches that have had several heats or have been bred,” according to the Dog Owner’s Guide.

Many owners come up with any number of excuses to avoid spaying/neutering their dogs. These include the belief that their dog will become fat and lazy following the operation. “The truth is that most pets get fat and lazy because their owners feed them too much and don’t give them enough exercise,” reports the Spay/Neuter Hotline.

Another common myth is that once spayed/neutered, a dog’s personality will change – his/her playfulness, friendliness and sociability with people will be curtailed. “A dog’s personality is formed more by genetics and environment than by sex hormones,” according to the Hotline.

Perhaps the most disturbing reason owners don’t spay/neuter their dog is the cost. The procedure can be costly, however, it is one-time charge and many vet clinics will gladly make payment arrangements with owners when it comes to spaying/neutering a dog. Local humane societies will also often sponsor reduced-rate spay/neuter clinics for this very reason. “It’s a bargain compared to the cost of having a litter and ensuring the health of the mother and litter,” add the Hotline. “Two months of pregnancy and another two months until the litter is weaned can add up to significant veterinary bills and food costs [and that is if no] complications develop.”

The Benefits of Hydrotherapy

First Aid for Your Dog

When You Can't Look After Your Dog

Natural Remedies
Share Your Story, Join the Discussion or Seek Advice..
DOES DOG TRUST HELP WITH GETTING MY FEMAIL DOG SPRAYED
ANDRENA - 28-Nov-13 @ 1:45 PM
This is a totally irresponsible article and only encourages scaremongering amongst unsure dog owners looking for sound advice. This article implies that all entire male dogs turn into psychopathic maulers at the age of 3! Absolute rubbish and generalism at its worst. I am no expert, but I have had 3 entire males - all well socialised and exceptionally friendly and well balanced - and appreciate that there are a number of factors that determine a dog's behaviour and personality, not least ill-informed or poor dog owners. I would urge anyone looking at this to read around the subject more fully and explore the pros and cons of neutering, particularly timing, and the effects it has on your pet's physiological and psychological wellbeing.
Clare - 24-Jan-13 @ 11:46 AM
IV just had my dog dressed, spayd. it might sound like a daft question but is it normal for her to cry nearly all day and threw the night! and if so how long will she be like this. also she has not passed any stools.
seanboy22 - 19-Jan-13 @ 8:33 PM
Title:
(never shown)
Firstname:
(never shown)
Surname:
(never shown)
Email:
(never shown)
Nickname:
(shown)
Comment:
Validate: